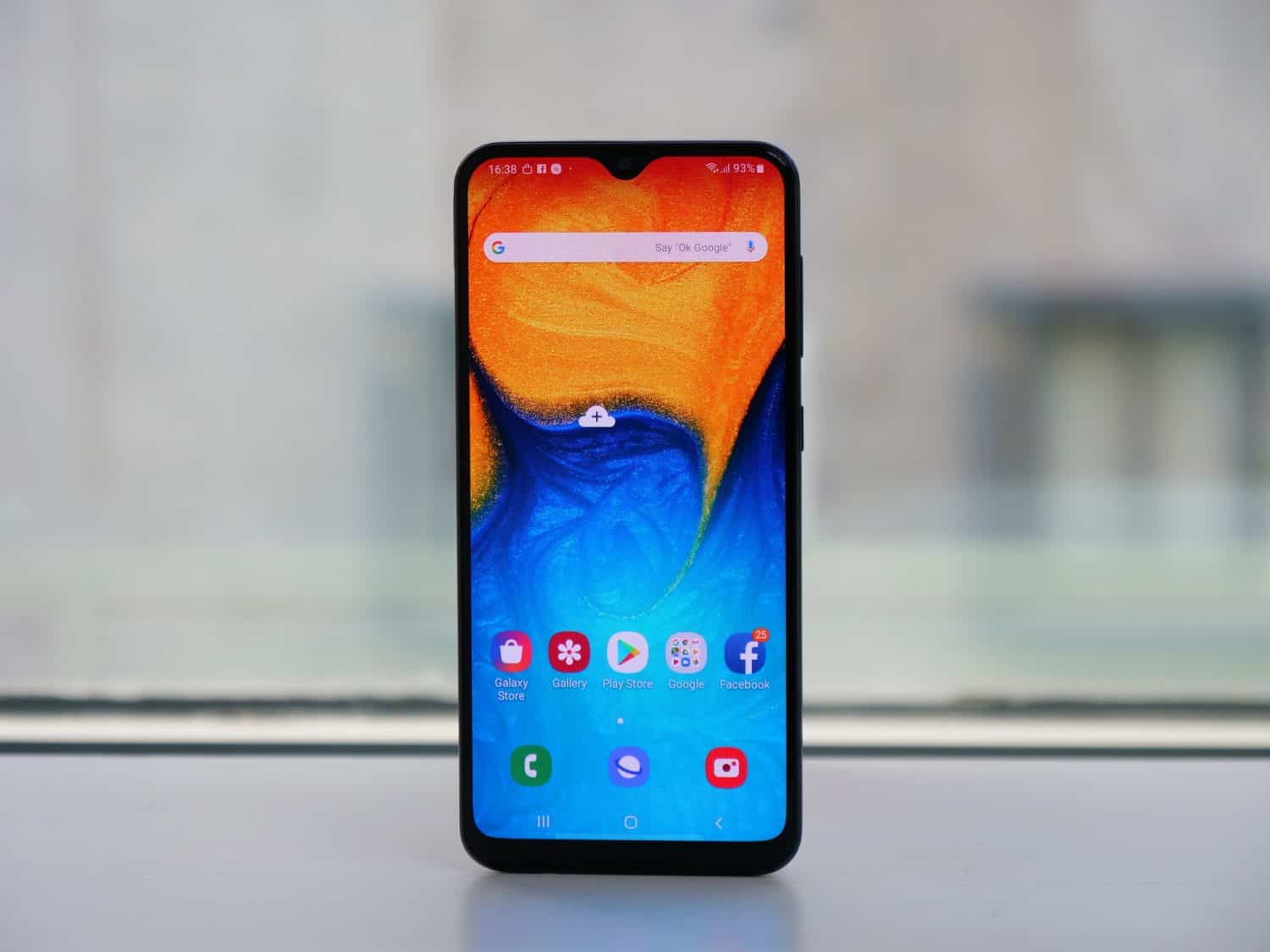 Samsung Galaxy A20 Review. Good Specifications With An Affordable Price

Samsung is not putting an end to releasing new smartphones for this year. you can notice new devices being declared one after another, trying to dominate the market. It has released many devices this year one of which is the Samsung Galaxy A20, which we are about to review today.

This device is considered as a mid-range phone with a suitable price if compared with other competitors in the smartphones market.

You can find Huawei on one side and Xiaomi on the other, but we shall confess that Samsung enjoys great popularity, and its new product can clearly succeed in this competition. Today we will take a closer look at the new Samsung A20’s advantages, disadvantages, and specifications. 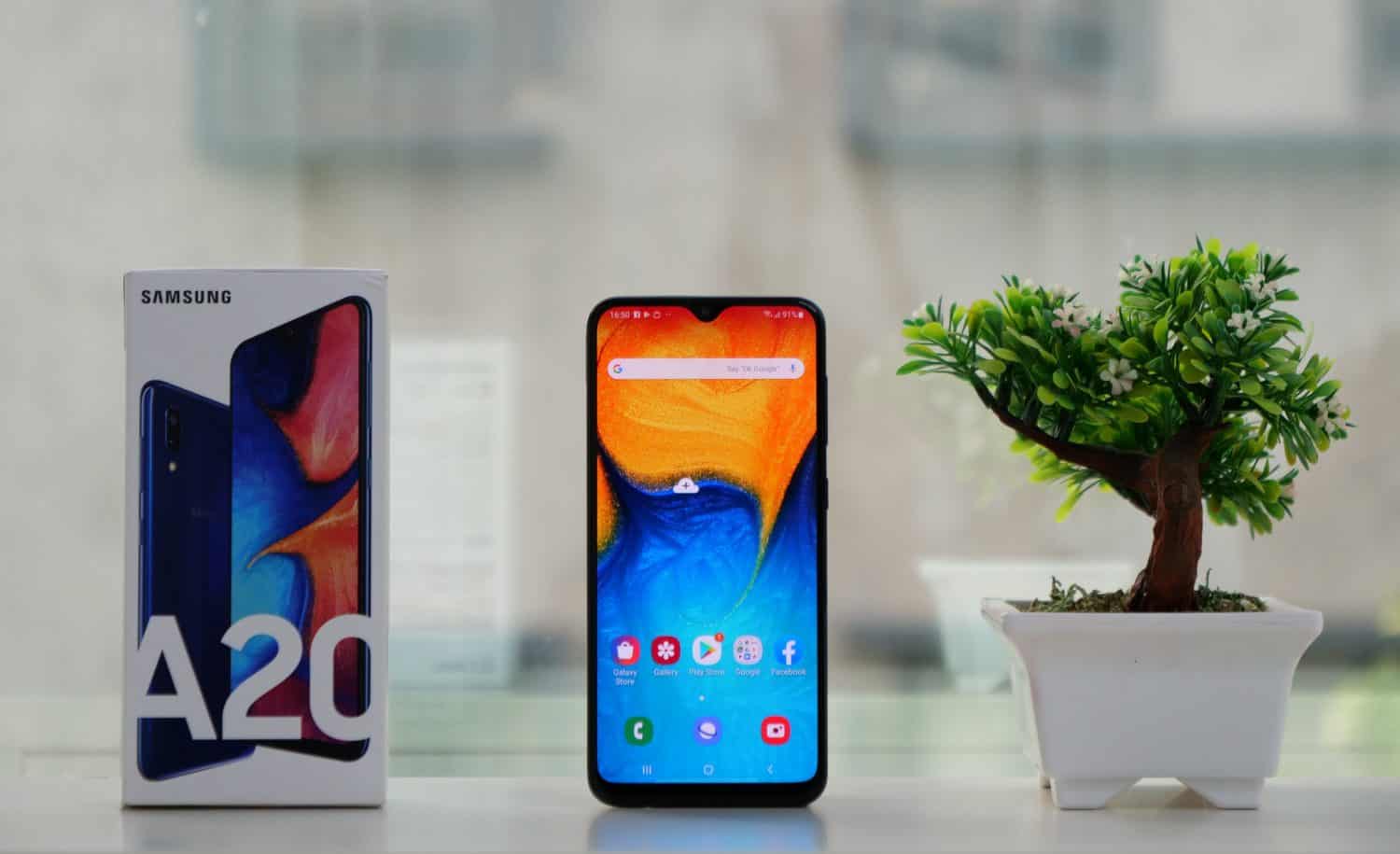 The body of this device seems not to be new. It has a conventional design retaining simplicity and elegance at the same time. This phone is manufactured from plastic, which is a negative point that makes the phone more susceptible to scratches.

The phone weighs 169 gm, which is light and comfortable to use with one hand. The phone’s dimensions are 158.4 x 74.7 x 7.8 mm. This phone has a 6.4 inches screen that occupies the greater part of the front side.

On the right side of the phone, you can find the well-known power and volume buttons, and on the left side, there are 3 slots, 2 of them for SIM cards and one for the external SD card. On the top side there is an active noise cancellation dedicated mic, while on the bottom, there is a microphone for phone calls, A headset jack port, and the charging port.

It’s worth noting that this smartphone has a USB Type-C charging port, and it’s good to see the headset jack port. On the backside, there is a vertical dual 13 & 5-megapixel primary camera. Below the lens, there is an LED flash. It’s important to mention that there is a fingerprint sensor on the back of the phone above Samsung’s logo. 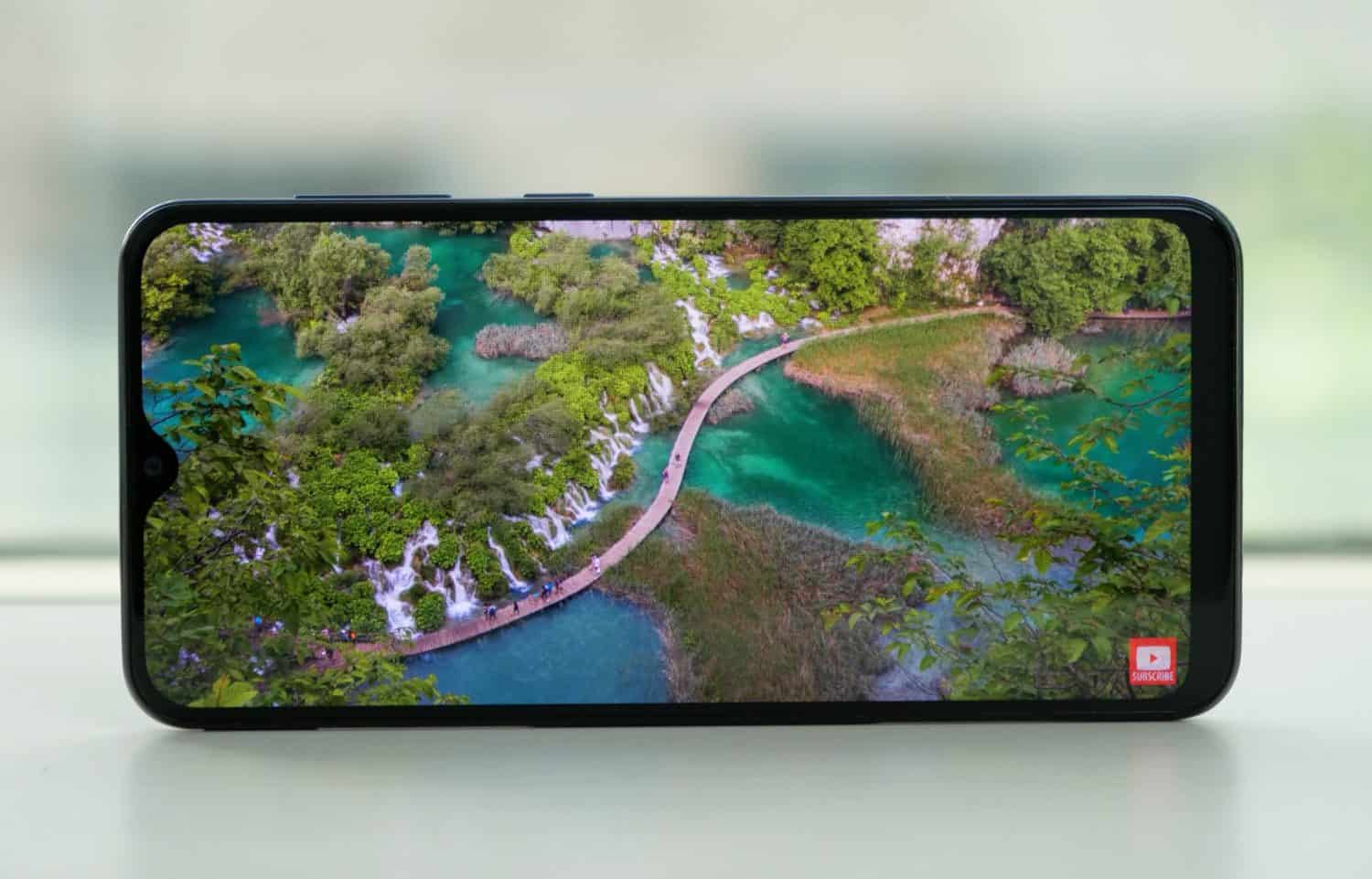 This phone’s screen is significantly unique, as it’s a 6.4 inches super AMOLED screen which seems to be a good size in comparison to its price and to other phones in the same category.

It has a good screen brightness and a really great screen resolution but it doesn’t come with a screen protection layer, so be careful when you are using it. 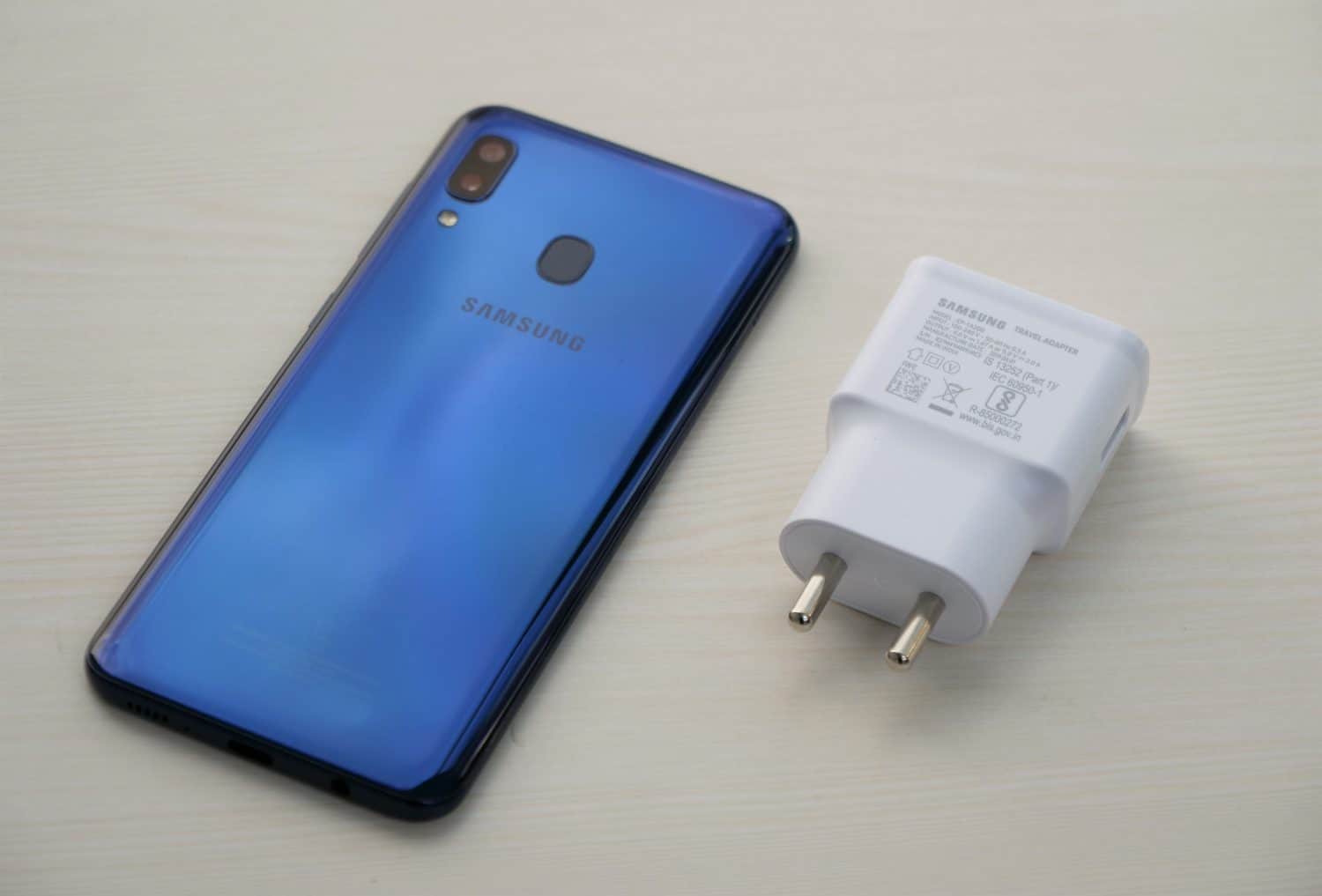 The battery capacity is so appropriate; it is 4000 mAh with fast charging technology. The good news for the users is that the battery’s performance is wonderful and you can charge it completely in one and a half hour, using the 15 W charger attached with the phone. In fact, you won’t find a better charging performance in this category.

After testing, it was found that the phone survives for 7 hours of on-screen time. The charging port is a Type-C port. This battery’s performance is much better than most of the other devices as Huawei Y7  and Realme 3 which lack fast charging technology. 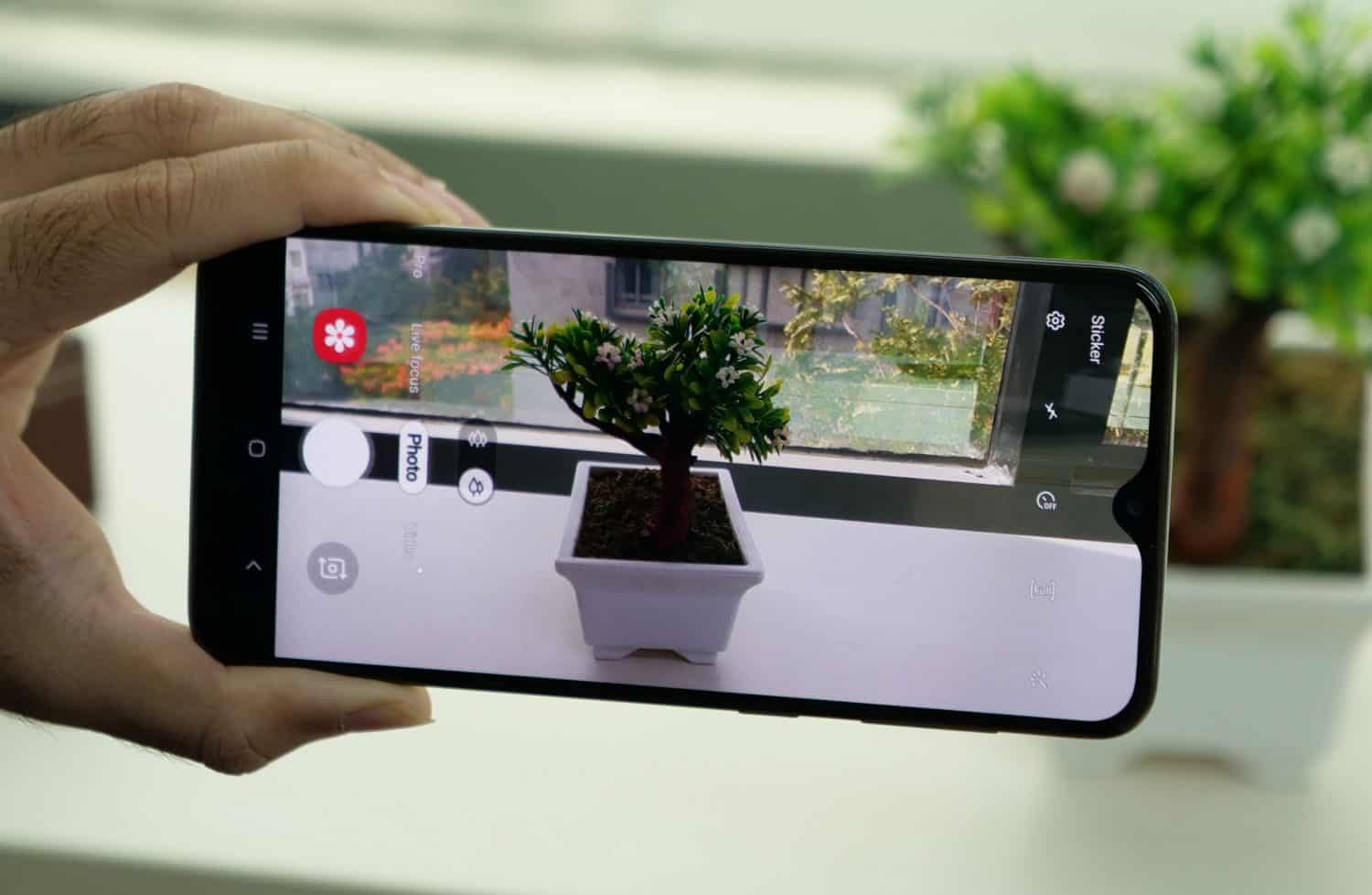 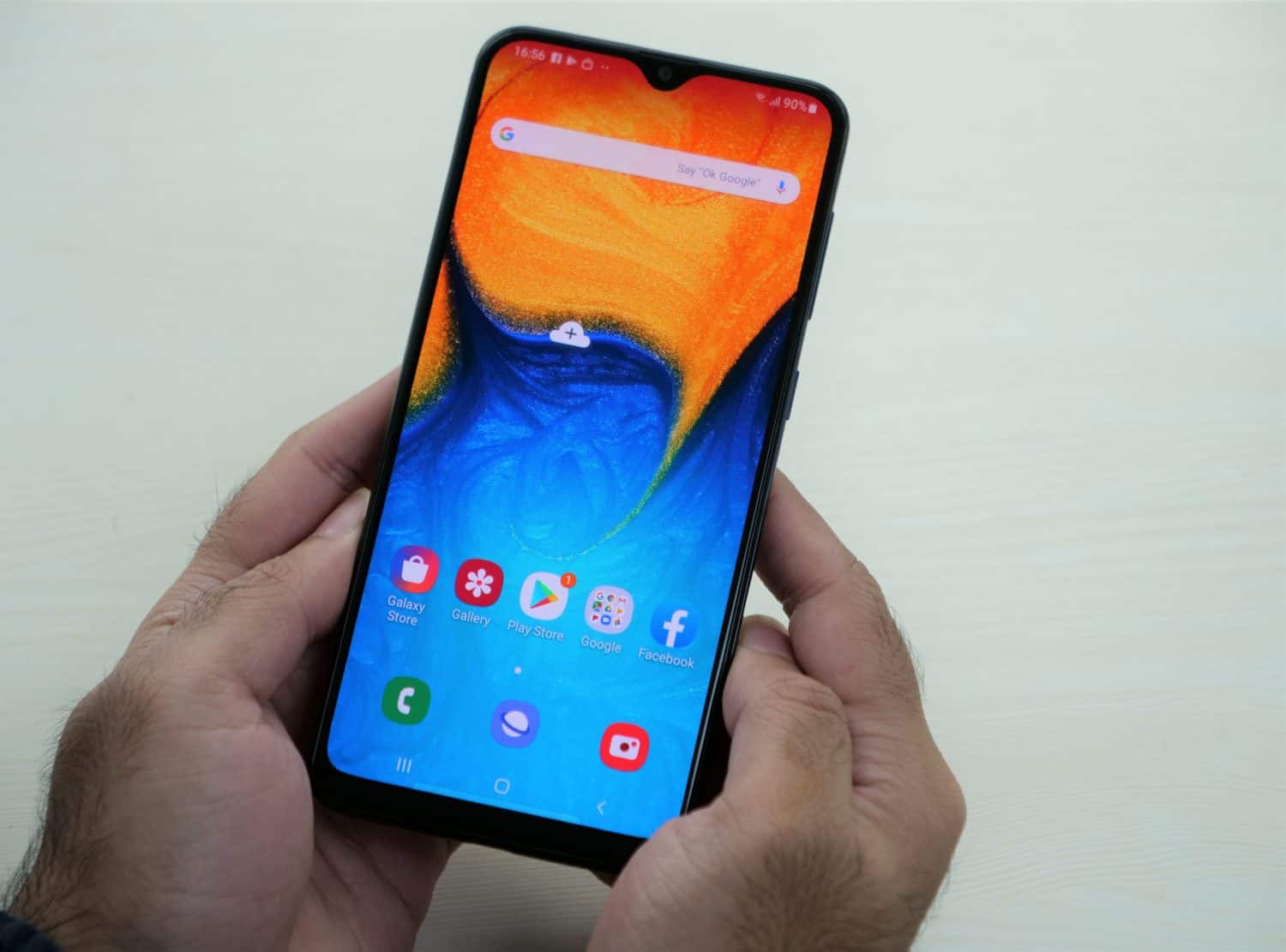 This phone has an Exynos 7884 octa-core processor with a frequency of 4×1.6, which is the same processor present in the Samsung 10, while the graphics processing unit (GPU) is Mali-G71 Mp2.

Moving to memory storage units, this phone has 32 GBs standard storage and a 3 GBs Random Access Memory (RAM) with the ability to increase the storage with an external SD card up to 512 GBs. It has a good performance and this phone scored good performance points but unfortunately, it’s not sufficiently fluid. However, you can freely run apps and games like PUBG without showing any problems related to performance.

The operating system is Android pie, and the user interface is One UI which is a nice unusual interface for users. You can enjoy Samsung’s popular sensors, such as the fingerprint sensor which is fixed on the back of the phone, the Face Recognition feature but it’s not very fast to recognize your face. Some other devices showed better results related to sensors. 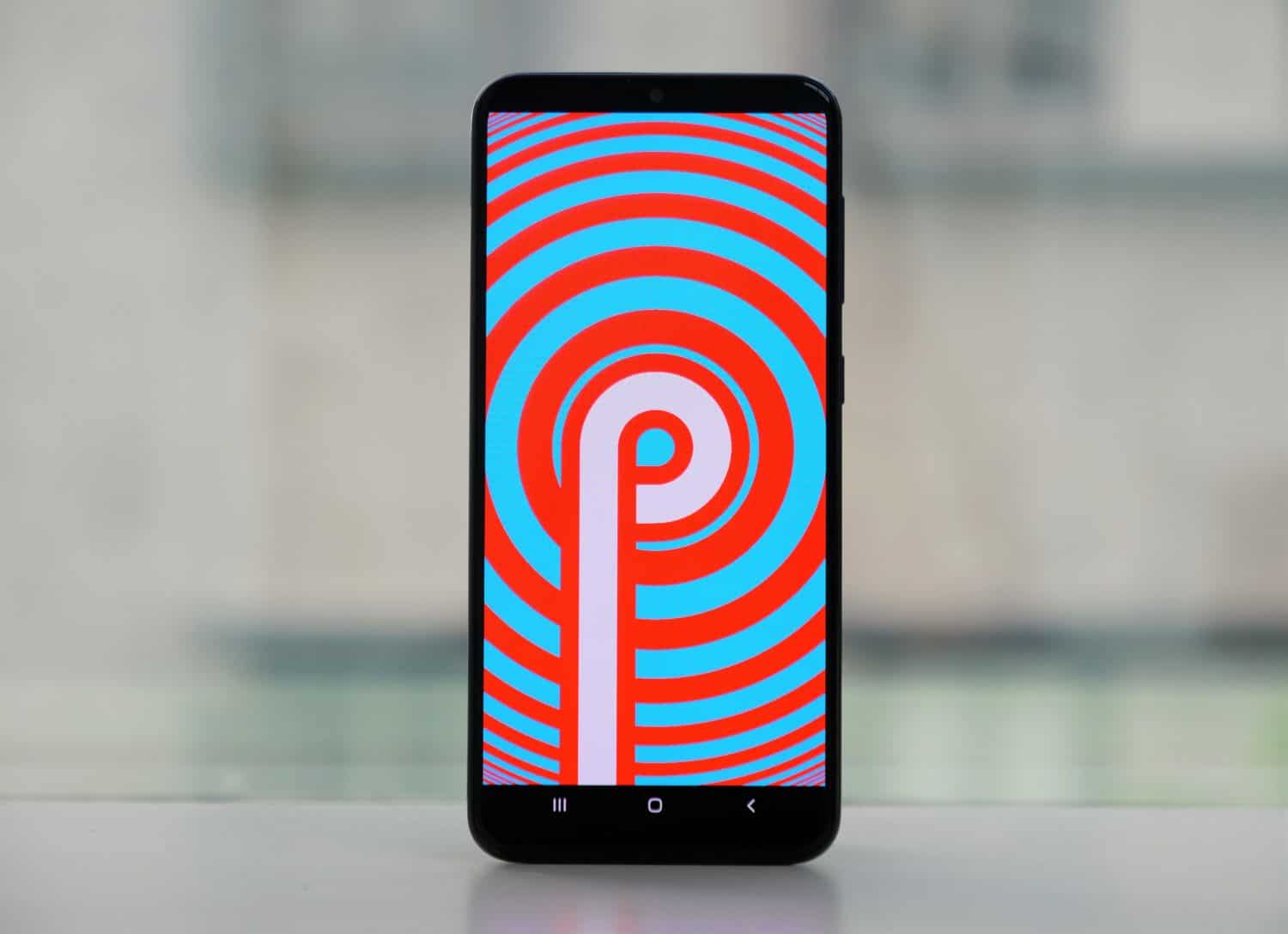 Speaking about competitors from a phone specifications point of view, there are a lot of competitors such as Realme 3 Pro, Redmi Note 7. A20’s high quality makes it competitive to other phones owing to its screen, camera, and its elegant body design, but its performance is relatively weak which leaves a bad point in this phone’s profile. In the end, you can’t find a perfect smartphone but it’s a mixture of advantages and disadvantages. We can’t underestimate any merit or neglect any demerit. The presence of a disadvantage doesn’t mean failure for this phone, as when it’s about comparison many points are taken into consideration.

The phone supports dual SIM which is preferred by most users.

Comfortable to use with one hand.

The phone body is manufactured from plastic which makes it more susceptible to scratches.

No proximity or light detector.

High competition in the smartphones market.