Samsung Galaxy A80 Full Review: For Your Amazement!

Samsung Galaxy A80 is the largest and most expensive member of the Galaxy A family to date, as it offers some amazing features, such as a full display without edges, a rotating camera, and other features. 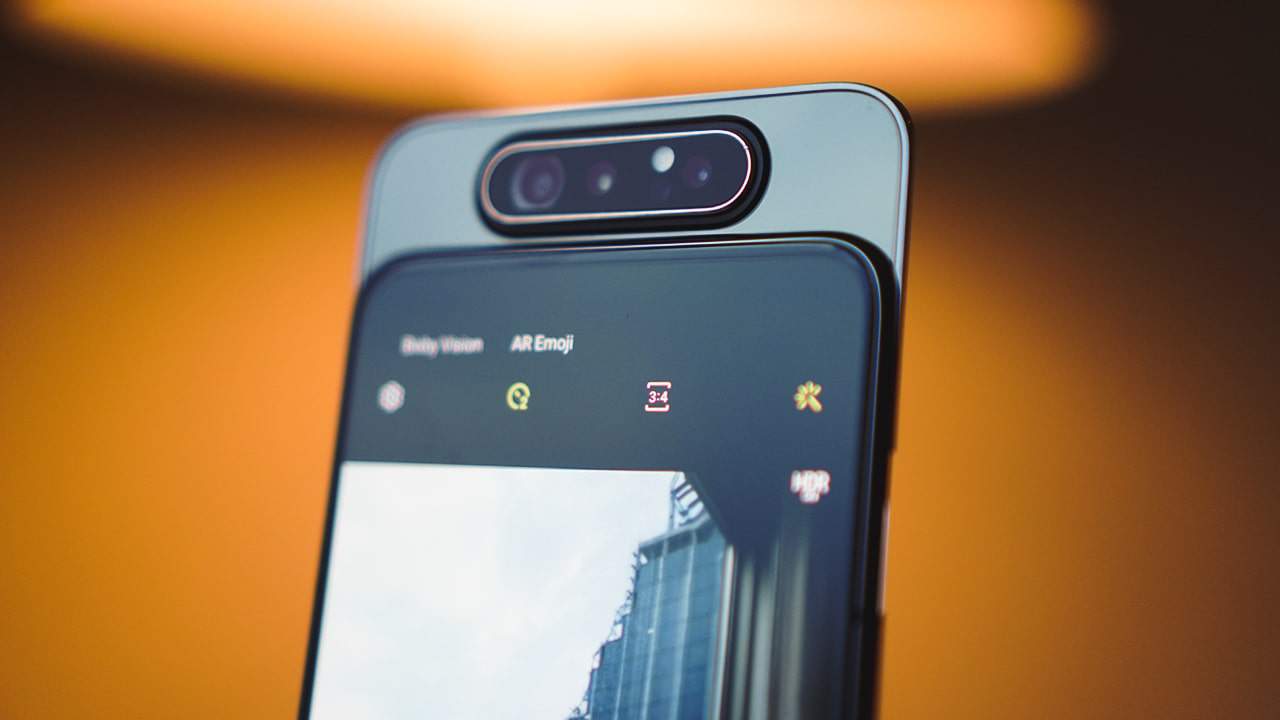 A high-class design but still strange.

The phone comes with an uncommon design from Samsung: the cameras are in the backside at the top of the middle part, with the presence of SIM card drawer at the bottom of the mobile, and the absence of a port for the headphones, with the distribution of the phone buttons on both sides of the phone. The power button is on the right and the sound one is on the left, and the buttons provide easy pressure.

The phone comes with a very sophisticated design made from a metal frame with a glass back protected with a protection layer namely, “Corning Gorilla Glass 6” with curves in the edges of the back to make the phone feel comfortable in the hand, but the phone is very huge, hence even with the bends, it is still difficult to carry and uncomfortable, and needs owners to have big hands.

The phone’s weight is about 220 grams and has a thickness of 9.3 mm, which makes it one of the heaviest and largest phones in the market. 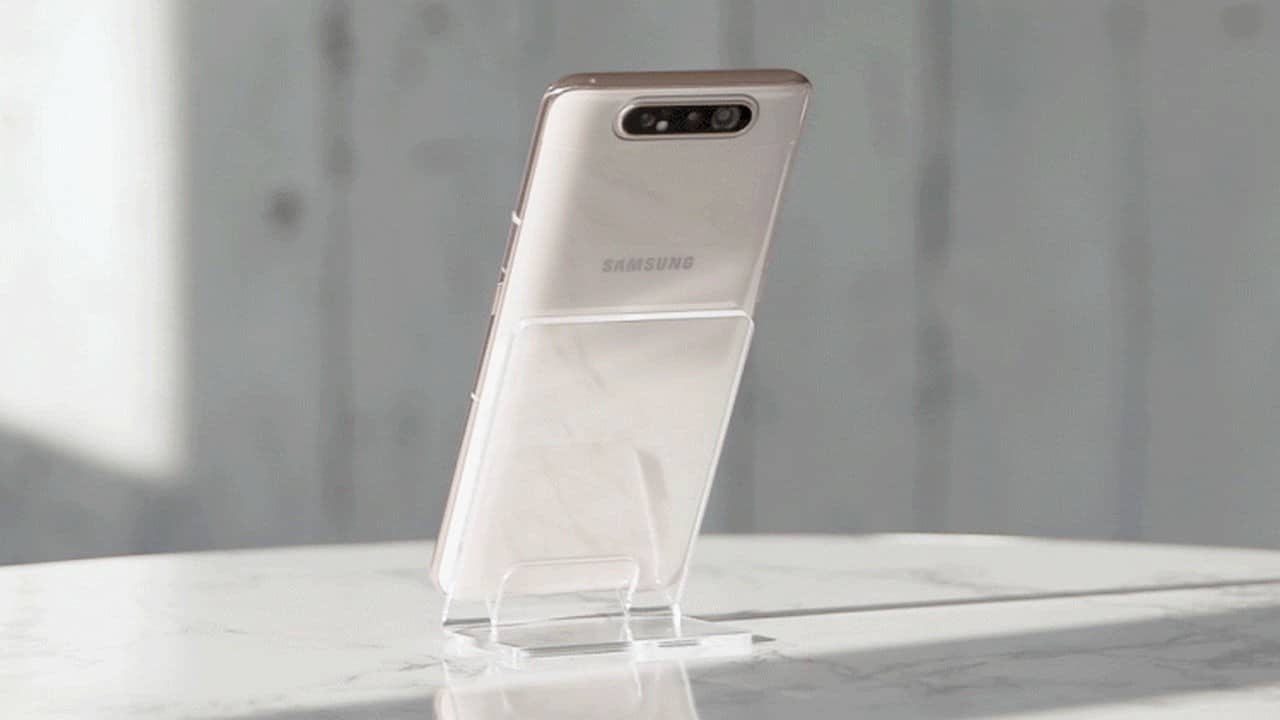 The best of this phone

Galaxy A80 comes with a giant 6.7-inch screen protected by Gorilla Glass 3 protection layer Full HD, and Super AMOLED type, without any edges at all and no notches or camera holes, which gives you a unique and wonderful experience that will make you love the phone at the first sight.

Samsung’s unmistakable screens are always as impressive as the colors and excellent brightness they carry, and they provide an amazing experience of watching videos and movies on the phone.

Good audio experience, but not up to the price of the phone

In this category, we always expect a distinctive audio experience, the presence of stereo speakers, and a good, deep, and high sound, but this is not the reality for Galaxy A80 which has only one speaker at the bottom of the phone, which offers a very good sound experience as volume but not the best in terms of depth and purity in this category.

The record and microphone experiences in this phone are wonderful and pure; there are no problems, but the experience of the call speakers is the worst for me in 2019: the speakers are buried down the screen, and its location is very bad as it is almost in the middle of the phone, and not in the top of the phone as usual.

Considering the location of the speakers with the weight of the huge phone, holding it becomes tiring and painful during long phone calls.

As for the sound, it has a good volume, but the sound does not carry the expected purity; you might feel like the sound is coming out a closed box.

The network is very good and we did not face any problems regarding it; the phone supports 4G networks.

There is a built-in call recorder in the system, but that is not available for all countries, as some countries, such as Saudi Arabia, do not have this feature. Moreover, there is a feature to know if the other party is in a call or not (Call Waiting).

This feature allows you to use all main camera specifications for the front camera as well, such as shooting 4K videos, and special bokeh effects in both pictures and videos, hence, a selfie camera with a very wide angle as compared to any other selfie camera.

The quality of the camera offers very good performance in the daylight, but with details less than those expected from this price category, however, its dynamic range is very good and provides excellent colors.

But its night performance is disastrous. It is not able to deal with lights and it carries much disturbance in night pictures.

The camera is good but as compared to others in the price category, it is defeated by most of the competitors such as Xiaomi and Honor.

At first glance of the phone, with its huge size and heavyweight, you will think that this phone carries a giant battery, but the reality is: it carries 3700 mA only!

With an improved interface in power consumption compared to the previous phone, this one can withstand for about 7 hours display on, with both WIFI and phone data.

There is an important note on the charger. The charger comes with a Type C port, which means that the attached cable is Type C on both sides, so you may encounter some difficulties in finding another cable in case your cable was lost. Also, if you do not have a modern personal computer with a type C port, then you would need to buy another cable to connect it to your PC.

The phone comes equipped with a new Qualcomm Snapdragon 730 processor octa-core, frequency of 2.2 GHz with cores of type Kryo 470, and manufacturing accuracy of 8 nm.

The most controversial issue about the pricing of this phone is its processor, as you get a mid-range processor at the price of leading Chinese phones and old leading Samsung phones! Snapdragon 730 is present in a phone priced at EGP 6,000 and is Mi 9T.

But the problem is: when compared to competitors such as Honor 20 Pro and Mi 9, we find that the performance is better with an obvious difference, it is smoother and provides a better gaming performance, hence we expect to see a more sophisticated processor in a phone priced at EGP10,899.

I did not feel much heat in the phone compared to the high temperatures of these days, but perhaps when using features such as the bokeh effect in videos and 4K, you will feel the heat and this is normal, but otherwise, the temperature is good.

Galaxy A80 with a Samsung interface ONE UI, version 1.1 comes with a security update for May month on the Android 9.0 system.

Improved as compared to the beginning

The Samsung UI features a wonderful design that makes you feel the integration and the unity between all its elements and effects, and it brings the system’s features closer to your hand.

The interface also has many unique features such as the Pop Windows, the Secure Folder with Knox protection system, and Samsung’s very special keyboard.

The disadvantage of the interface are: not as smooth as the previous interface of Samsung, but it has improved a lot as compared to before

The maps and GPS experience in the phone are not the best. The identification of the place is good, however sometimes it takes 30-40 seconds to precisely identify it, hence if you are walking in a strange place it might make you get lost for a while before it identifies the location perfectly, however, with a bad compass, the experience gets worse.

The leading and most powerful competitor of Honor’s company. Offers better cameras, better battery, and better audio experience, and definitely better performance, but a weaker screen.

The leading Xiaomi is excellent in its performance, camera, and audio experience, but with less efficient battery and screen.

The phone provided impressive features. at the first glance, it will fascinate you with the beauty of the phone, such as its screen, camera rotary and features such as bokeh effect in video and the wide-angle, but when evaluating the phone compared to the competitors we will find that the only advantage of the phone is the screen. With the presence of leading phones from Samsung at a closer price- such as the Note 9 and after the expected drop in its price- Galaxy A80 will not behave any advantage, except maybe the shape of the Motorized pop-up rotating camera. Perhaps Samsung itself knows that this type of phone is called “Proof of Concept”, and they are not intended to sell a lot of it, instead they want to show it off and to introduce new fancy products, directing those who love trying new things, breaking the boredom and not caring about money; not for people who wish to keep the phone as their fixed phone for 3-4 years, and are unable to change their phones after a short period.