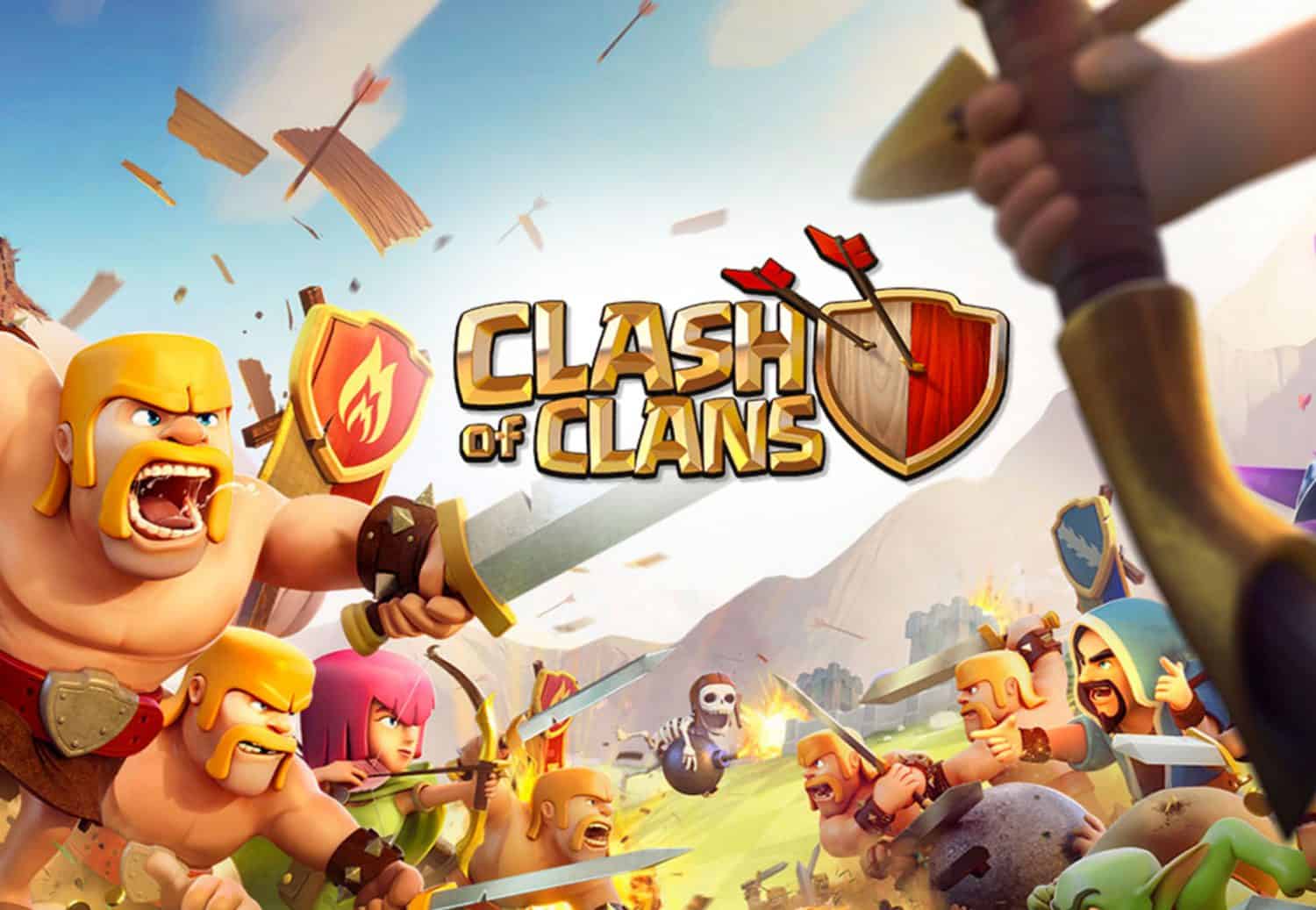 Clash Of Clans The Game – Meet The Most Popular Strategic Game Ever!

Lately, Clash of clans has spread widely. You can see some people playing it where you are traveling or setting in a cafe. Even when you are scrolling down Facebook, you will see some of your friends talking about their achievements in the game. And if you haven’t played this game yet, this is the right article to know about it as we will explain the game and in detail to you.

Clash of clans is a strategic game with a beautiful war tactic. It is available on Android and iOS. It had spread like fire when it was published. It has reached a very high downloading percentage by users. It has preserved its popularity until this moment.

The game depends on your ability to build your village with your engineering planning, to make it able to handle wars and victory. Be the leader; walk your people to glory and wealth.

If you are new to Clash Of Clans, this article is for you to know about its essential principles

The game relies on using your resources of gold and Elixir and working hard to build the defenses and soldiers’ training centers. Then, you should come up with a unique attack plan to destroy the enemy’s defenses. And take the gold and elixirs which will help you develop your defenses and reinforce your village. Besides, you will win trophies that help you progress. Thus, increasing the spoils.

Beware, your loss will decrease your trophies, and your village will be exposed to attack. Failing to organize your defenses may lead to losing trophies and spoils as well. So, think deeply to make your town invincible against armies that want to invade your town and take your Piggybacks. Be a successful leader. You can play the game solo or in a group with the guild you joined. 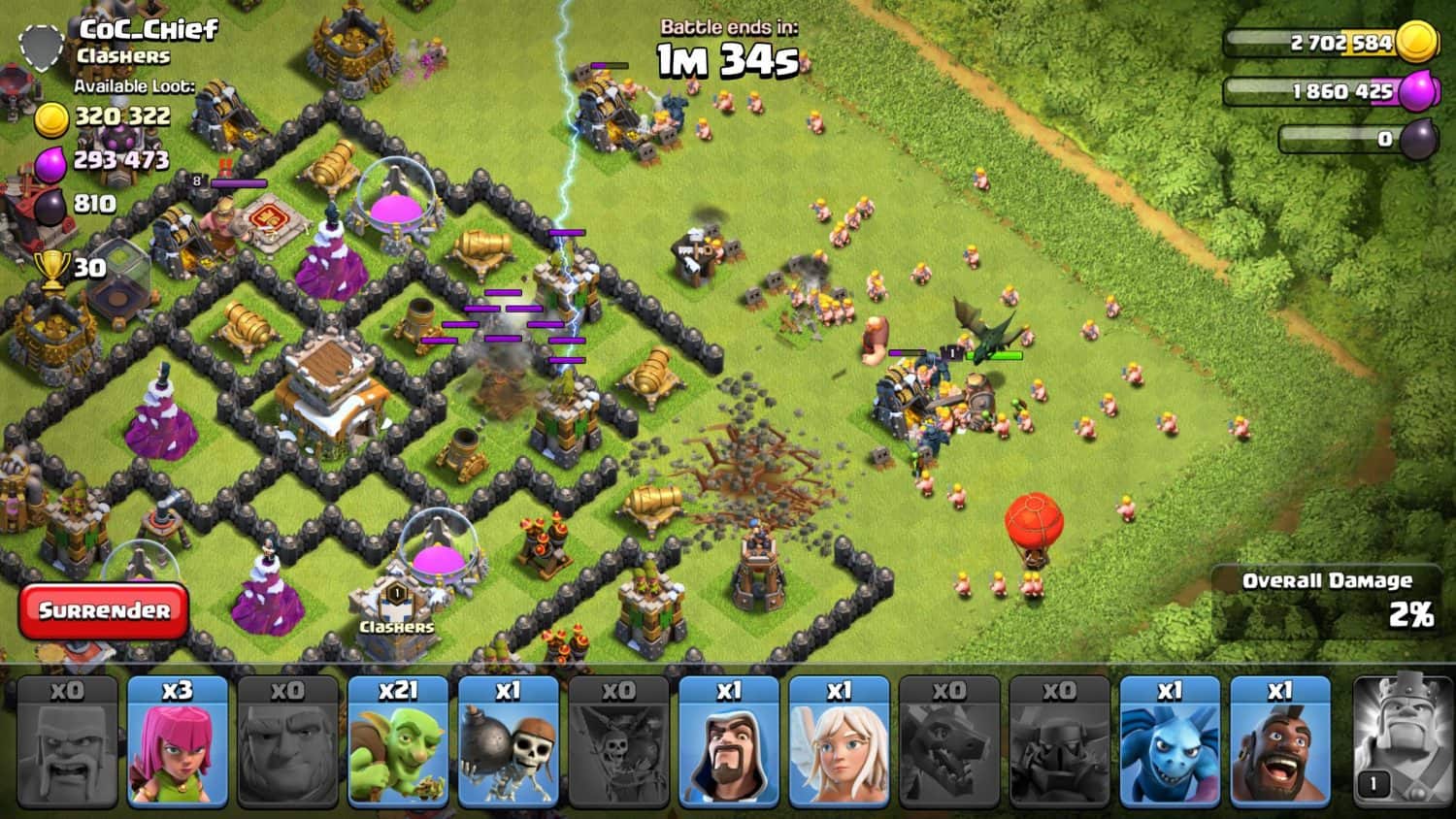 I will introduce the clash of clans interface by explaining every number in the picture:

1- The upper tape shows the hours number of defending the village by the shield against the attack. You will gain the protection either by being attacked and destroyed completely or by being 30{1b09b8fb2584dfb3e4aa9a8c3ead58281d36c8ce346588358e0d991cf39b6a1c} destroyed. Or by purchasing protection from the store by jewels. It also contains your name and the number of workers who are doing the construction in your village.

2- Number of trophies, every group of trophies entitles you to a championship according to your trophies’ number. The more trophies you have, the more rewards you gain.

3- The mail that came from the guild, or clash of the clans’ team.

4- Attack icon, which makes you join a random attack to earn trophies and resources.

5- Gold, Elixir, and the dark elixir you have:

6- Chatting with your guild or communicating with all players in clash of clans using the global chat.

8- An icon to put the design of your guild, allows you to set a group of designs for your guild and your guild’s warfare.

9- It contains the clash of clan’s news besides the latest events. 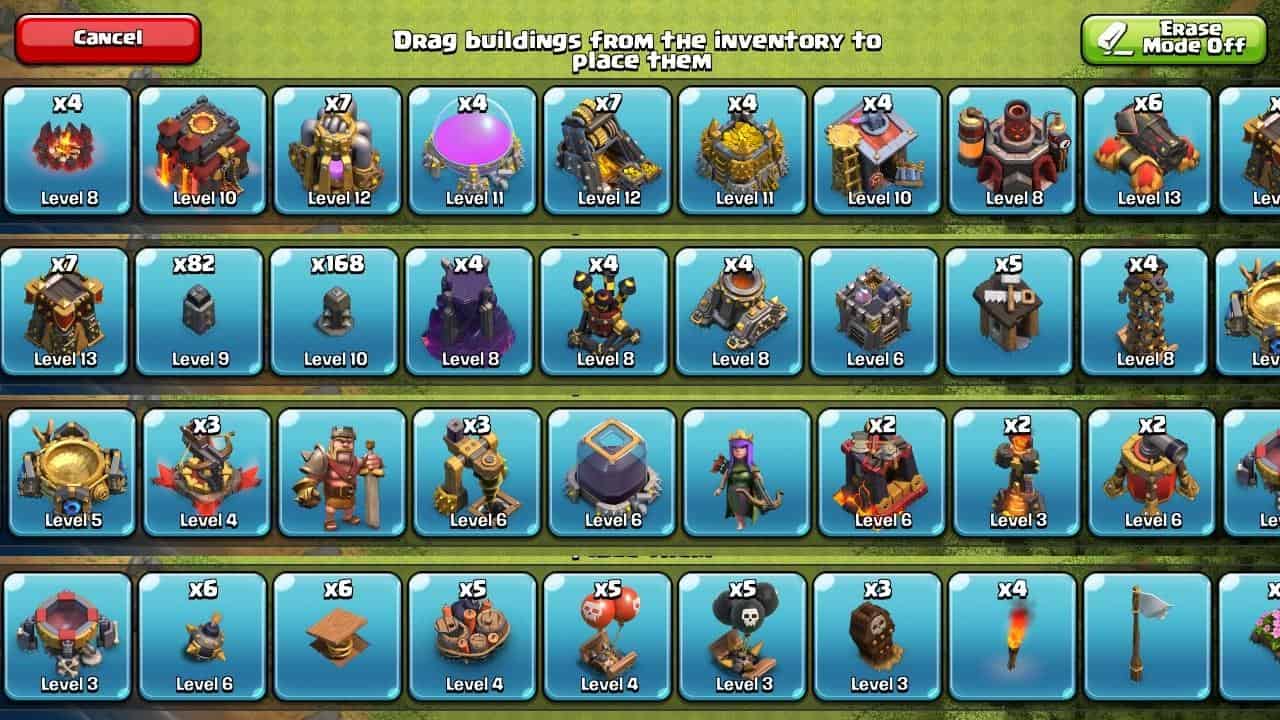 The village contains a group of buildings; every building has its specialization to form a complete village full of people. Types of existing buildings include defense buildings, training buildings for soldiers, and Piggybacks that produce gold and elixir.

And a group of traps that hit the enemies on the ground and in the sky such as bombs and bowls…, and the walls surrounding your village which slow the enemies down to give the cannons more time to destroy them.

Every piggyback of gold, elixir, and darkness elixir a certain amount of resources during a certain time. The amount produced by each piggyback increases with the promotion of the piggybacks, the piggybacks will form a good source of income for the piggy resources. In addition to the guild wars and the random battles which will help you upgrade the buildings and increase your level.

The laboratory: is the place where you upgrade your forces. In addition, there is a group of chemists who work in complete secrecy to produce magic tools that help your forces while attacking your enemies.

Weapons’ factory: A veteran magician factory fits the magic weapons industry more than fighting on the front lines. Where he manufacture the magical spells that favor your side in the battle, the capacity of the factory increases when you promote it.

The dark magic factory: the workplace of the more intelligent and reckless magicians. Use the dark spells as it contains tactical features to attack the enemy.

The workshop: you should have a city bottom of level 12to be able to open it. A workshop is a place where siege machines are built. On upgrading the workshop, new siege machines will be available for you.

The military camp: forces were mobilized in camps before declaring war on the enemy. Promote these camps to increase the number of forces you mobilize. This increases your chances of winning the battles.

The training barracks: a place where the forces train to be ready for fighting. On promoting those barracks, more powerful and developed forces will be available for you.

Darkness barracks: those barracks will open the gates for the hidden dark forces that were produced from the dark elixir. When you upgrade those barracks, more hidden forces will be available for you. Those forces have more unique fighting skills.

They are the places where you can store your elixir, gold and darkness elixirs. You can use them to rain the soldiers and promote them. But you must be keen on outing the stores in a safe place away from thieves. 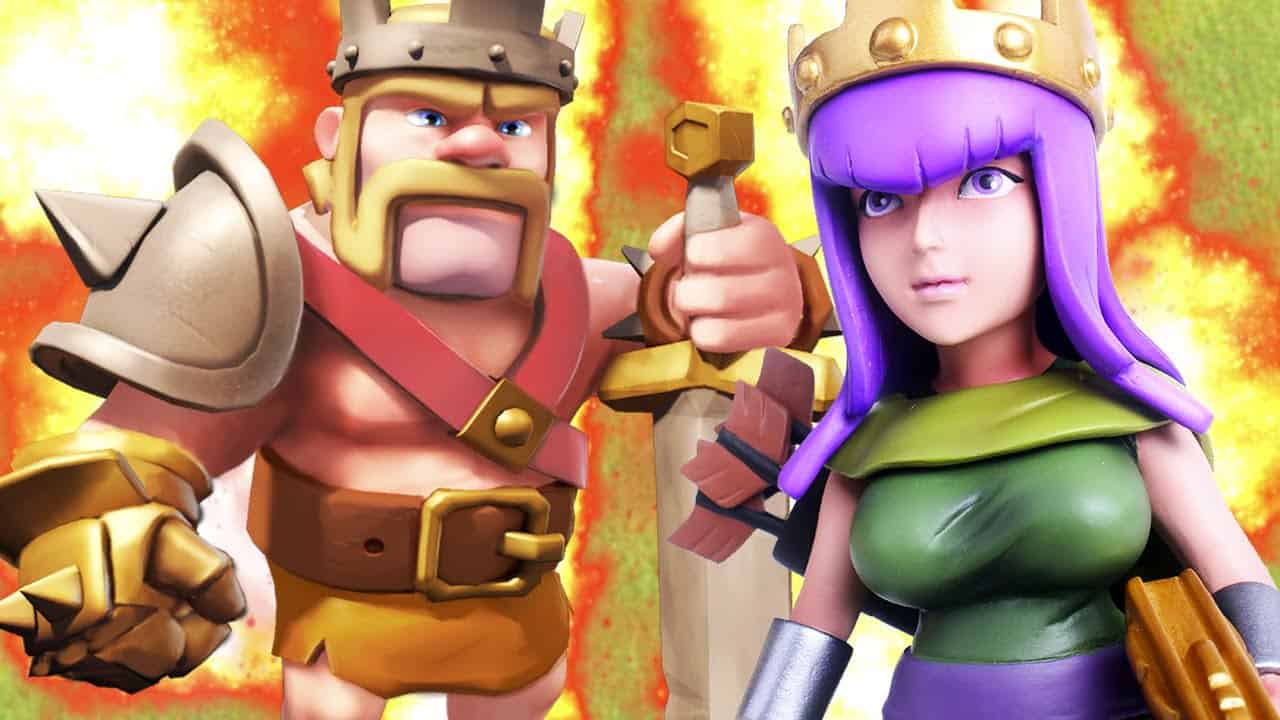 They are the heroes of the clash of clans. They contribute to both attack and defense. Make sure they get a good rest to be ready for battles. Or accelerate their healing by jewels. Of course, upgrading the heroes will increase their strength and life points. So, upgrade them as they represent your village’s power. 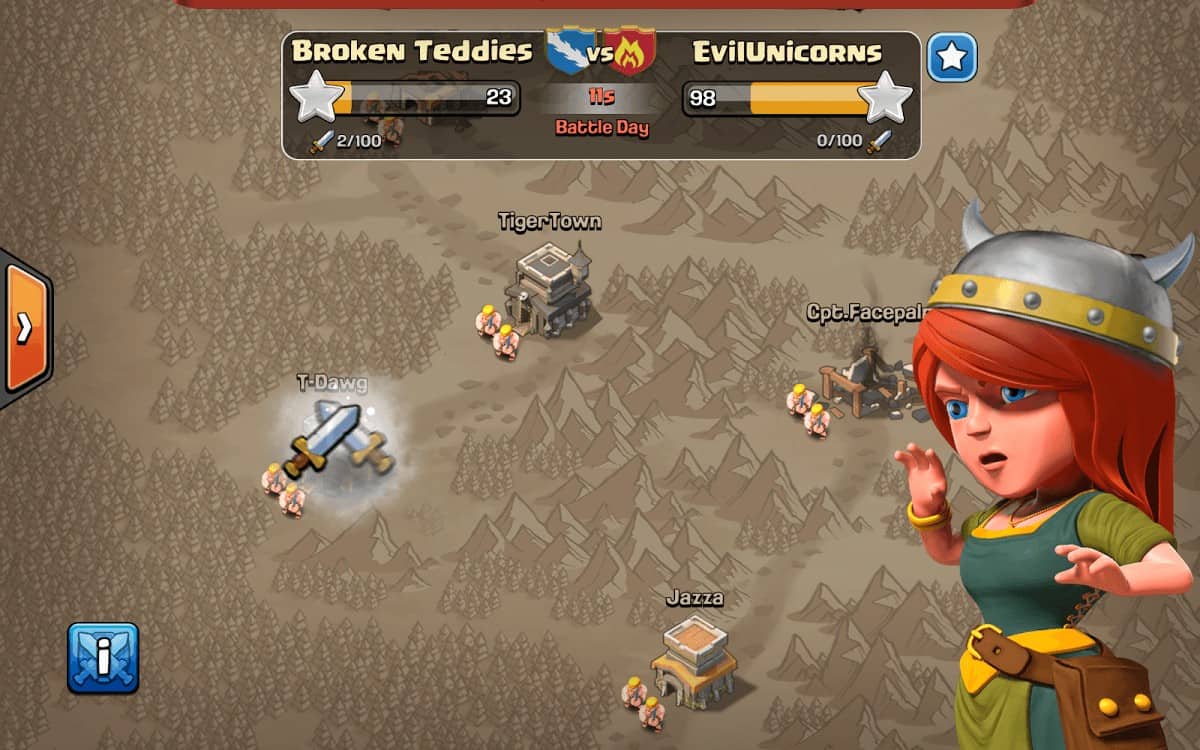 The guild leader or one of his assistants can start the war. The war contains a group of players and the least number of players in 10. So, make sure to design your land in an appropriate way. Because you will attack your enemy and he will attack you. The guild that achieves the largest number of victories wins the war. And the fine resources which will contribute to developing your village. 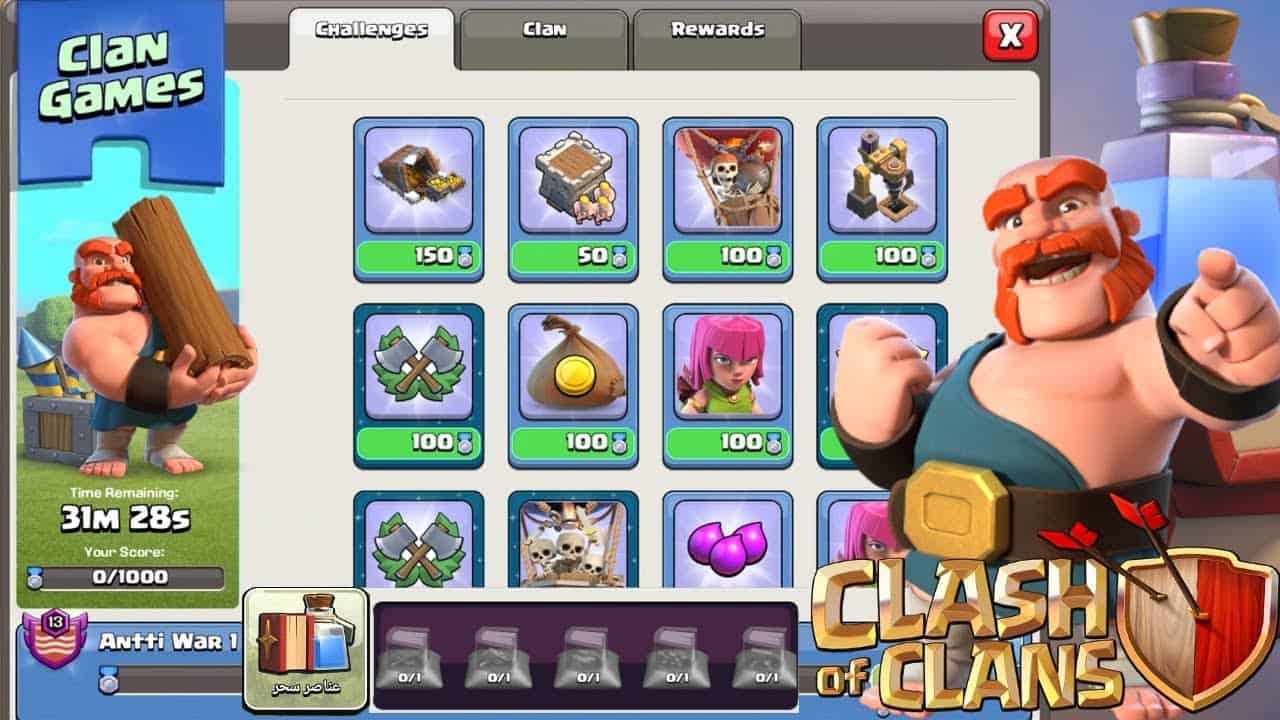 The guild matches are about completing the challenges and earning the points with your guildmates altogether. The more points you earn as a guild, the better rewards you get at the end of the match. Be sure to include your guildmates; because the more players you have, the easier the tournament levels will be. 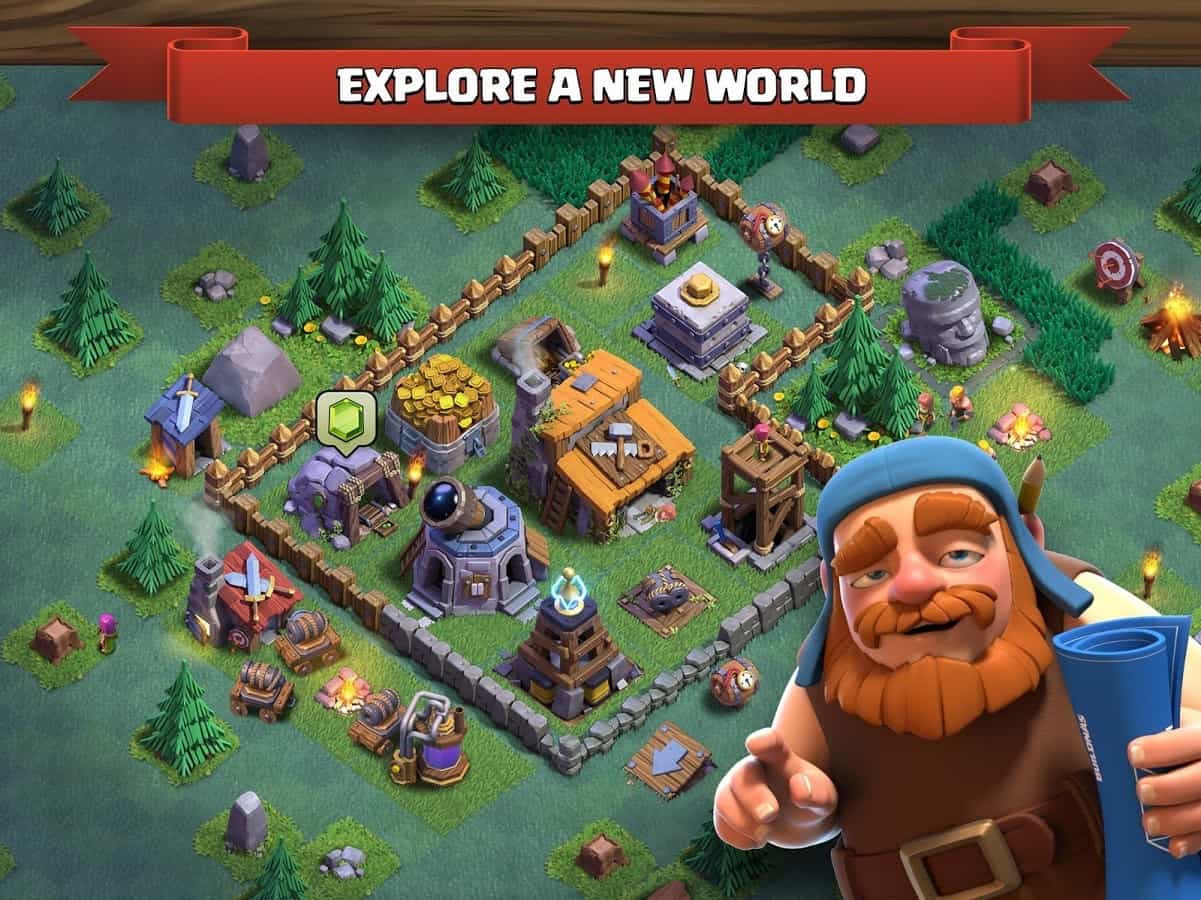 Try sailing your ship to reach the new world. Build your new city, which will support you and represents your guild. And reinforces your defenses. This new village has added more fun and addiction to the game; to make you stay in the game for the longest time possible, and to reduce your waiting time.

But, the war style in this village is different from the main village, as the enemy will attack you the moment you attack him. The one who achieves the most destruction is the one who gains the resources. Of course, this village in the New World added you different additional forces and new defenses to build a new world and discover more.