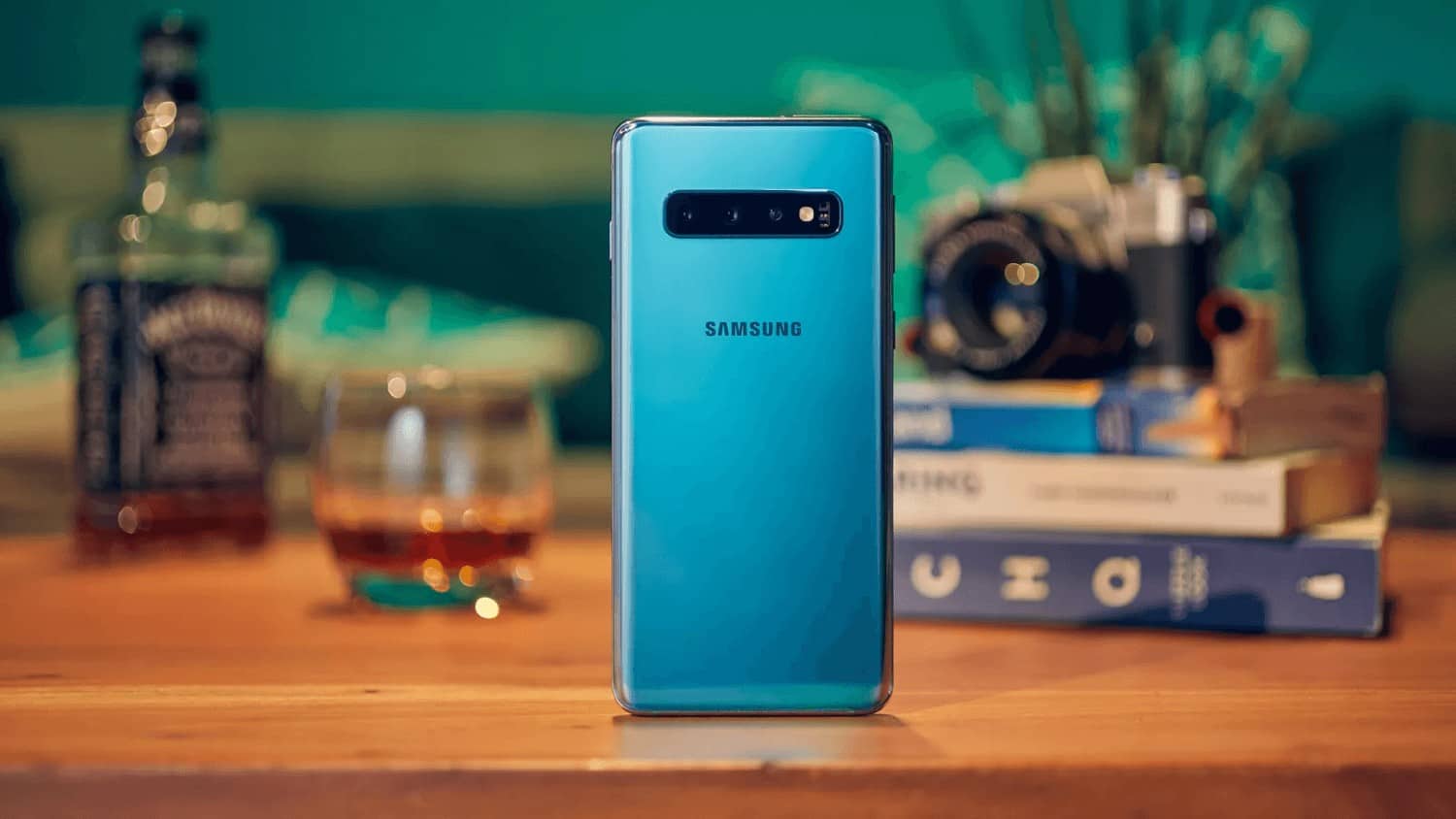 When Samsung announces a new S-class smartphone, technology enthusiasts, as well as other competitors, await its release to witness the new technologies introduced by Samsung in this phone.

With this year’s new S10 lineup, Samsung affirms that they are leading the smartphone market through new technologies, screens, specifications, and features, which will, undoubtedly, raise the competition ceiling for the year 2019. 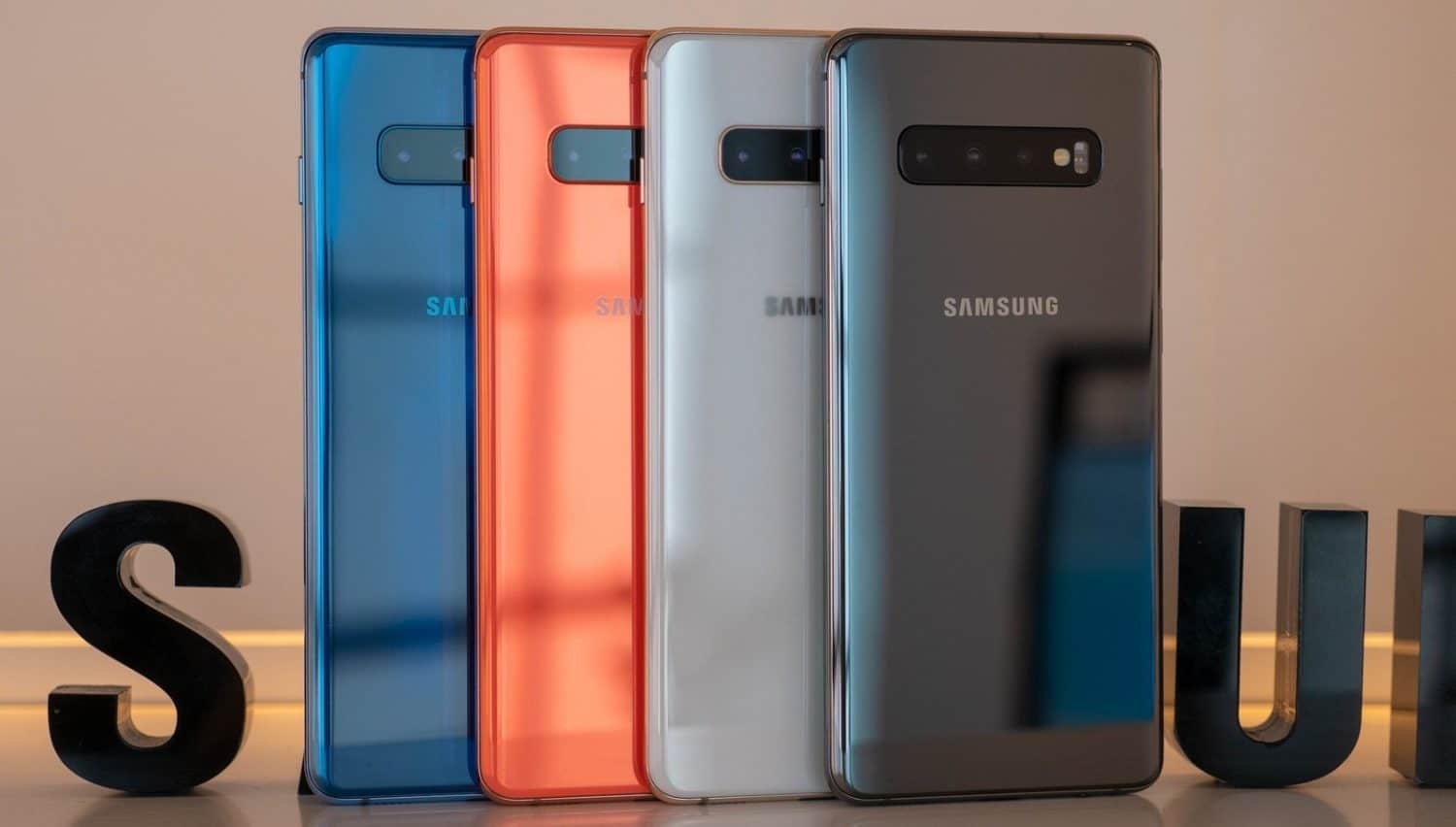 Samsung uses a simple design approach, which they began using with S6 in 2015 and continue using to this day, with some changes in dimensions and edges in every new phone of course. This model, despite its simplicity, is one of the most successful design approaches out there.

This design adopts the basic principle of efficiency. Samsung’s goal is to cramp as much hardware, features, and capabilities as possible within the smallest space possible to produce feature-rich compact devices.

For example, the new S10 + has the same screen size as the Note9, but with smaller dimensions, weighs 25 grams less, and rocks a larger capacity battery!

However, being that long of the device, there is a real disadvantage when it comes to the power button placement, which is somewhat difficult to access in one-handed use.

The rest of the control buttons are well placed on the left end of the device, which includes the volume control buttons and Bixby button, which is customizable; One click will take you to the Bixby assistant and two will open an application of your choice.

Samsung gave its Galaxy S10 a shiny aluminum frame like the rest of the its top-class devices; a habit they started with S6 phones.

As for the colors, you can choose between gradient blue, white, black and gradient pink. The color variations differ depending on the markets where the device is sold.

Both the front and back of the device are covered with Gorilla Glass (version 5 on the front and version 6 on the back). The S10 series also has IP68 protection against liquids and dust.

For S10+ only, you can also choose a different body material; Ceramic, which is available in black and white only.

The back of the device includes an array of three cameras and a flash light which is the same with the S10 and S10+.

On the front, S10 comes with the new Infinity-O screen, which includes a hole for the front camera, which can also be hidden, like all other phones with notches, using the “Hide camera” option.

Nano SIM slot, microSD which can also be used as a second nano SIM slot, and one of the two mic openings are found on the top edge of the phone.

On the bottom, you can find USB-C charging port, headphone jack, the second mic as well as the speakers. 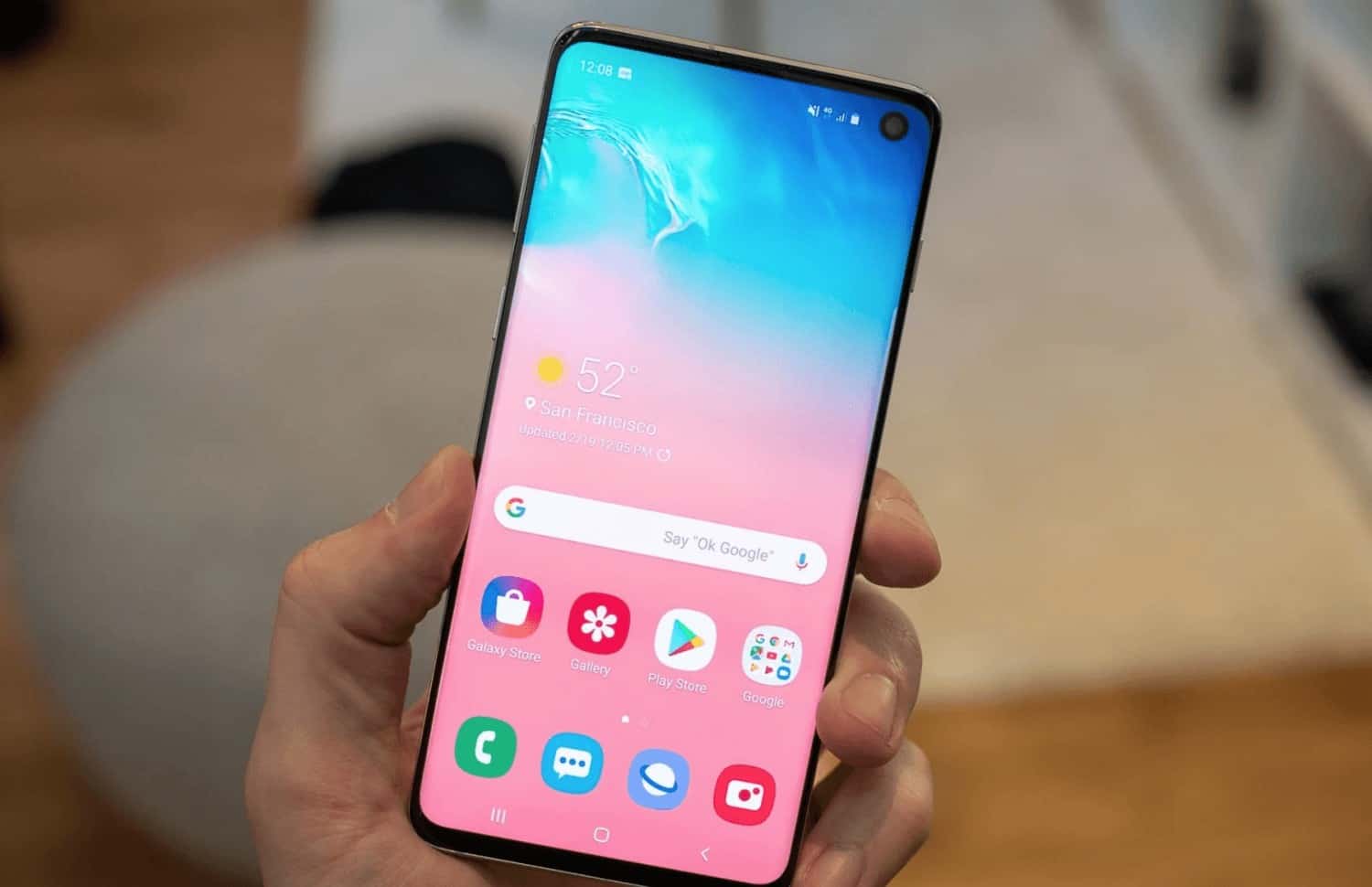 All S10+ phones come with the new Dynamic AMOLED screens, which is an improved version of the Super AMOLED screens used in previous generations.

DisplayMate gave it the best OLED in the world for its beautiful and accurate colors, as well as the amazing viewing angles and the reduced reflections from the surrounding. All of this makes it possible for the screen to be viewed in any lighting condition, even in direct sunlight, the screen won’t be a problem. 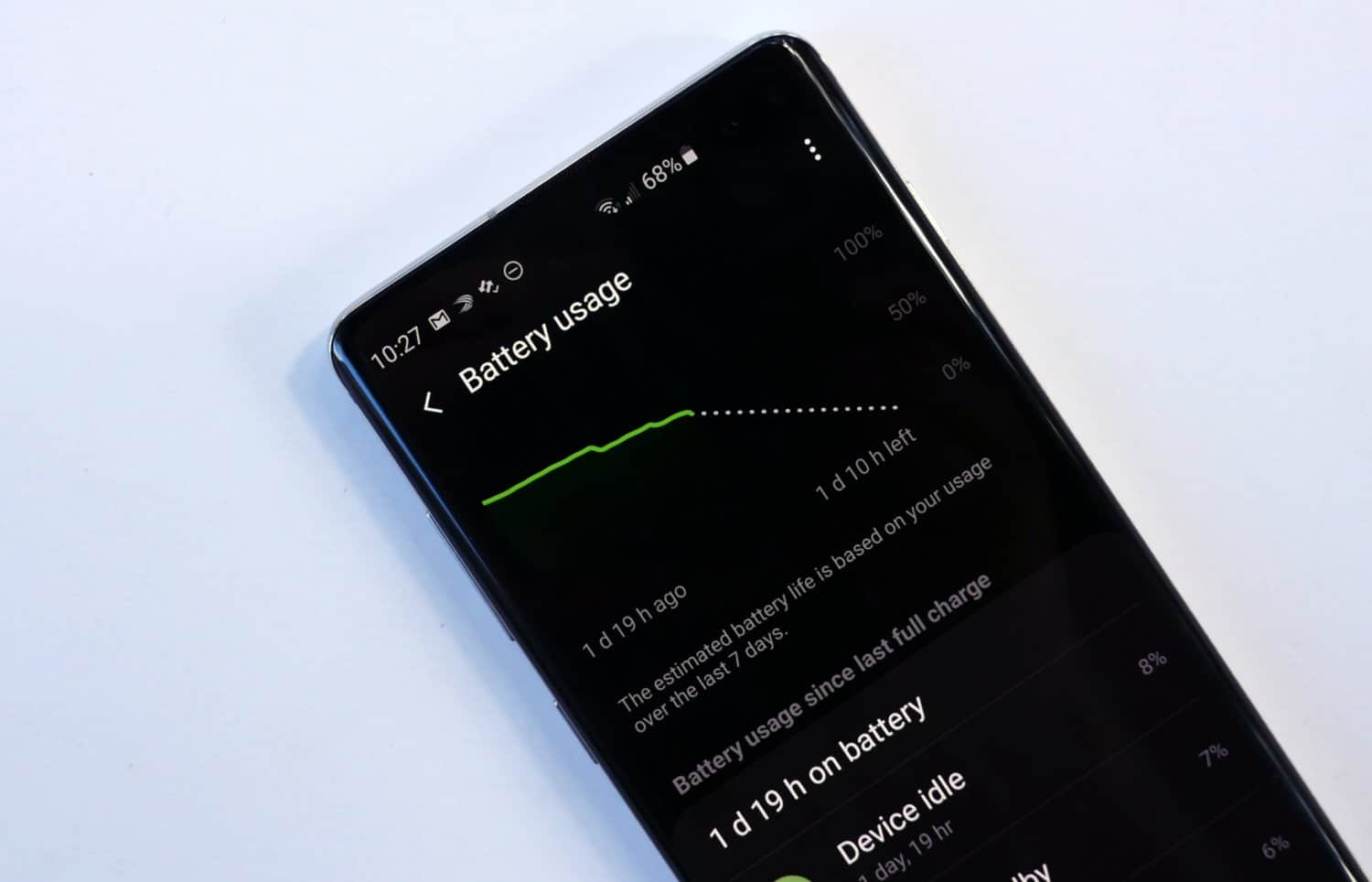 Galaxy S10 comes with a 3400mAh, surpassing all competitors in the same category; iPhone XS has a 2658mAh battery while Pixel 3 has a 2915mAh battery.

A fully charged battery is enough for 10 hours of Wi-Fi browsing, around 13 hours of video playback, and around 21 hours of call time. 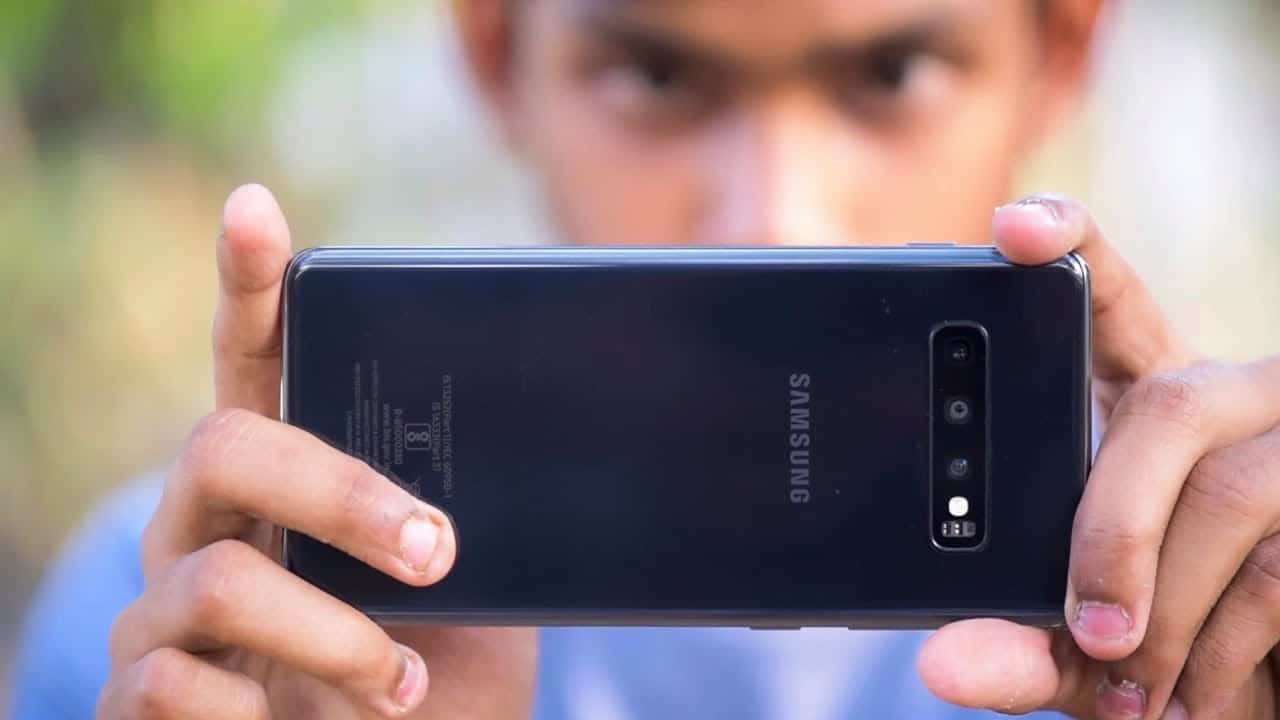 Samsung added a new wide-angle camera to the new S devices, after adding a zoom camera in the last generation; S9. Thus, the total number of cameras on the back of S10 reaches 3.

Both the main and the zoom camera feature a 12MP sensor, which is the same sensor in use since Galaxy S8 and Note8.

The new wide-angle camera features a 16MP sensor, with a 123 degrees angle, which is somewhat close to the human eye’s field of vision.

All these cameras are capable of producing amazing pictures close to professional ones, even if you’re not an expert, and in all lighting conditions. But the Pixel 3 remains the better phone when it comes to low light or night photography.

As for the front camera, Samsung Galaxy S10 comes with a single 10MP camera with a live focus feature that uses AI to isolate the objects from the background. Which is done in the higher model. S10+, through another lens

As for video, Samsung Galaxy S10 can capture 4K 60FPS videos, with the anti-shaking feature as well as the new Super Steady feature which provides stable video in very shaky conditions like rough roads.

Also Read: 10 Android Phones Have The Best Camera For 2021 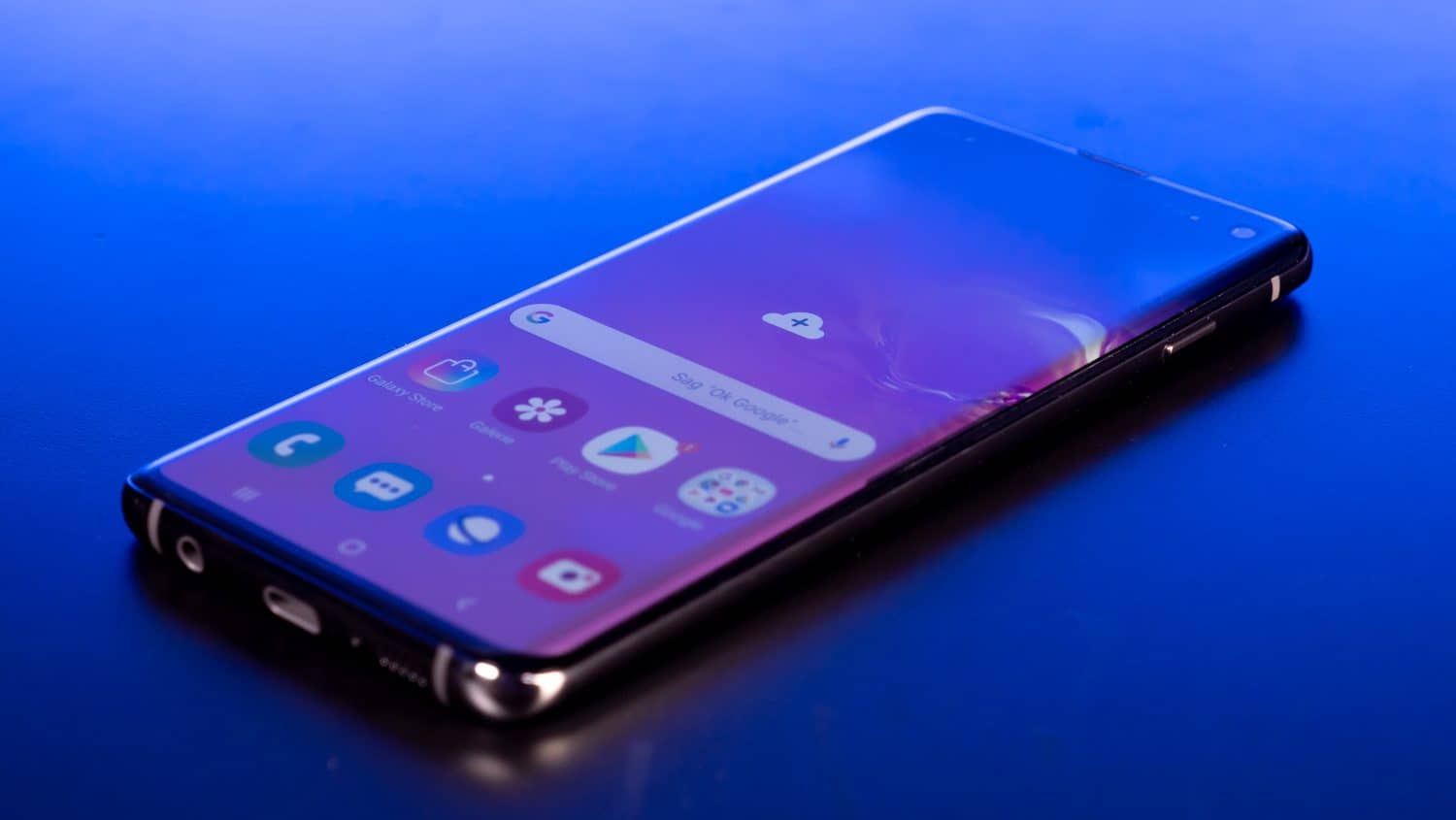 Galaxy S10 comes with either Snapdragon 855 or Exynos 9820, according to the market, with an 8Gb of RAM and two options for storage spaces; 128GB or 512GB. All of this is more than enough to provide excellent performance with all apps and games.

Samsung ships the new S10 with Android 9 Pie, as well as its new One UI, which is considered one of the best user interfaces out there.

The new interface is clean, user-friendly, and is customizable by the user; you can change the icons, colors and font type, and size.

Compared to Apple’s iPhone XS, the Galaxy S10 excels in terms of wide-angle shooting (not available on the iPhone) as well as the quality of selfies.

Samsung S10 also has longer battery life, faster charging, is lighter weight, easier to use and the screen is easier to view in sunlight.

Compared to Google Pixel 3, the latter is superior in terms of portability, night photography, or low-light conditions, and its ability to produce great pictures even with only one rear camera.

Pixel 3 also features a clean version of the Android that receives updates directly from Google instead of the modified version used by Samsung.

The main advantage of the Xiaomi Mi 9 is its price; it costs half as much and comes with somewhat similar specification to the Samsung S10!

The best OLED display ever

The fingerprint sensor needs to be improved

Not the best object isolation from background compared to competitors

Not the best night shooting capabilities compared to competitors